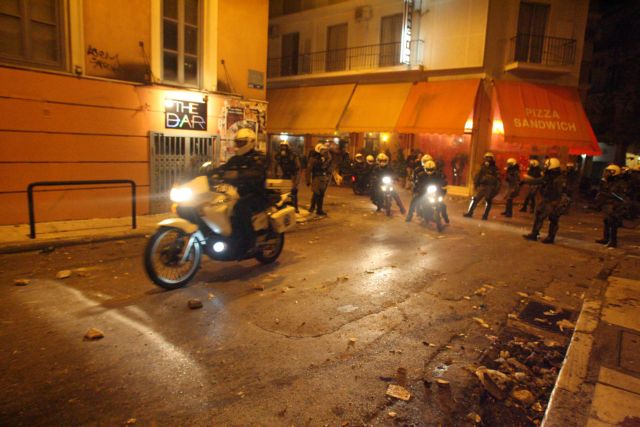 The police arrested 11 protesters on Saturday who participated in an anti-fascist demonstration in down town Athens. Amongst the 11 protesters are one minor (facing a felony charge) and a Turkish political refugee who was injured in clashes with the police. The 11 arrested protesters will be taken to state their plea before the courts today.

According to the Athens News Agency, of the two minors who is only facing misdemeanor charges has been set free, while the other, who will be take to the courts to address the felony charges of covering his face during the protest, disturbing the peace and attempting to cause grievous bodily harm.

A Turkish political refugee, who was injured in the clashes with the police and also faces felony charges for covering his face during the protest, will be taken to the courts today. Pictures taken during his arrest however show that the protester’s face was not covered. The Turkish national explained to left.gr that “riot police suddenly attacked me with nightsticks and kicks for many minutes. I was on the ground. They did absolutely nothing. At some point I experienced a shock and lost consciousness”.

The political refugee was given first aid on street and eventually he was taken to a hospital for further medical tests, where eyewitnesses claim that he was under police guard. Despite the injuries he sustained, the Turkish man was discharged and promptly detained by the police.

An MP who asked police officers about the condition of the Turkish political refugee was reportedly told him that “he slipped and fell” and that he was allegedly attacked by anti-fascist protesters.

The anti-fascist protests took place to counter a rally by the ultranationalist Golden Dawn party for the crisis at Imia. During the event, party members revealed that if Golden Dawn is banned, it has taken steps to be rebranded as “National Dawn”.