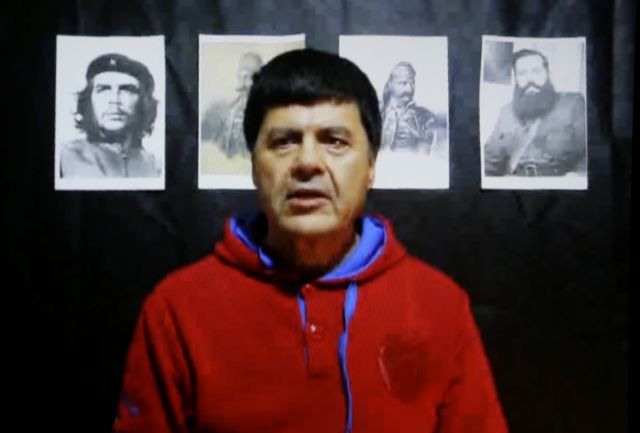 The 17 November member Christodoulos Xiros, who escaped from prison during a scheduled leave earlier in January, has published a video and a manifesto online, addressing his escape and intention to resume his militant activities. The video and text were uploaded at the athens.indymedia.org website on Monday afternoon.

In the accompanying video, the 56-year-old Xiros appears to be seated in front of a black background, where there are four pictures of Ché Guevara, Greek War of Independence heroes Theodoros Kolokotronis and Georgios Karaiskakis and Greek Resistance partisan leader Aris Velouhiotis.

In his written manifesto, part of which he read out in the accompanying video, Xiros attacks the New Democracy and PASOK coalition government, as well as opposition parties SYRIZA and KKE. The escaped convict was particularly scathing in his criticism of the extra-parliamentary left and anarchist groups “for accepting anything, so long as they don’t take to the streets”.

Xiros explains that “I am in no case what you describe, but I am most certainly what you fear” and warned of attacks against the media. Regarding his escape, Xiros claims that he had made a conscious decision to escape in order to take up arms “against those who stole our life and sold our dreams for profit” and urged authorities “to kill me, because if you capture me, I will escape to fight you to the bitter end”.

Later in his video manifesto Xiros calls for members of anti-authoritarian groups to join those “who have adopted guerilla action”, whether they are imprisoned or free, because “if we do not react immediately, now, today we will stop existing as a people and civilization; the only chance of exiting this tragic situation is through conflict, overthrow”.

Xiros called for unity as “we have a war and you cannot chit-chat during a war, you fight”. Xiros targets “ministers, MPs, politicians, unionists, journalists, police officers, security guards, tax collectors, bus conductors, drug dealers, the enemy’s propagandists and every paid tool of the banks and State”.

Xiros’ lawyers Frangiskos Ragousis was invited on ANT1 on Tuesday morning and interpreted the “openly confrontational” manifesto as a “wake up call” and not as the announcement of a “bloodshed in Greece”. Ragousis noted that the content of the manifesto was in line with Xiros’ values and denied rumors suggesting “he has been arrested and forced to read texts”.

The Minister of Justice Charalambos Athanasiou noted that “the Greek state is obligated to protect the people from those plotting against them. That is why the operation of a maximum security detention center is a necessary measure against the enemies of Democracy”.

The Bakoyanni family, which had been targeted by 17 November, also issued a statement noting that “Christodoulos Xiros is a ruthless, cold-hearted serial killer who insists on taking advantage of Democracy’s moral superiority. He will find his place in prison where he belongs”.

The Government Vice President and Minister of Foreign Affairs Evangelos Venizelos commented from Brussels on Xiros’ escape and argued that it was “an unfortunate event that must lead to the revision of legislation and practices”. Mr. Venizelos explained that the Greek authorities must reclaim its lost credibility with regards to terrorism.