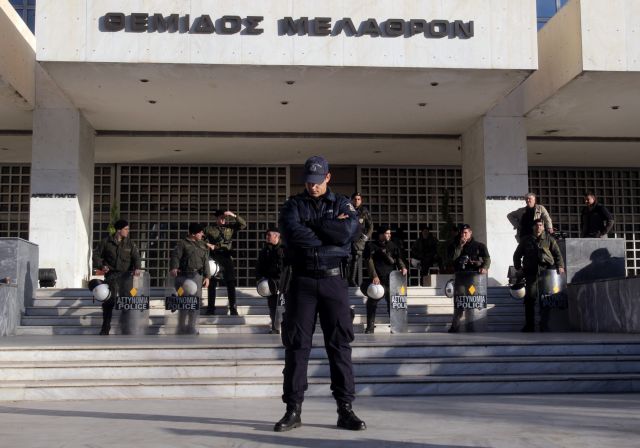 The Supreme Court’s investigative judges handling the ongoing investigations into ultranationalist party Golden Dawn have ordered the detention of three MPs, Giorgos Germenis, Panagiotis Iliopoulos and Efstathios Boukouras, after marathon hearing sessions on Saturday and Sunday. The three men are facing charges of joining and directing a criminal organization.

The three MPs will be joining their party leader Nikos Michaloliakos, his second-in-command Christos Pappas and MP Yannis Lagos at the Korydallos prison in Athens, who were all detained in fall of 2013. With six MPs detained, Golden Dawn’s parliamentary group is now reduced to 5 MPs.

Giorgos Germenis was the first MP to address the charges against him on Saturday. Amongst the evidence against him is the testimony of a protected witness who claims that Germenis was referred to as a “major” and had a central role in the recruitment and training of Golden Dawn members in the “assault groups”. Testimonies of other protected witnesses implicated Stathis Boukouras in an extortion ring that operates in Corinth, Xylokastro and Kiato. Similarly, Iliopoulos is regarded as a prominent member in the party.

The three MPs denied the charges against, with Iliopoulos claiming in his plea that Golden Dawn is not a criminal organization, that there are no “assault groups” and that there is no “inner party circle”. He further stated that “it is inconceivable, non-institutional, unconstitutional and undemocratic for Justice to engage in political/partisan strife” and argued that he and his fellow MPs were being persecuted politically.

Boukouras, who was the last to state his plea on Sunday, on the other hand adopted a different strategy. Boukouras demanded that he unconditionally be set free and denied having any racist belief, as he employs migrant workers in his business. He also claimed to have been a party supporter since 2012 had previously been a member of PASOK, as well as running for municipal council in Peristeri with the support of New Democracy.

Golden Dawn MPs Eleni Zaroulia, Ilias Panagiotaros, Konstantinos Barbarousis and Ilias Kasidiaris along with about 100 party supporters gathered outside the Supreme Court to support the three now-detained MPs. Amongst them was Germenis’ father who accused the protected witnesses of perjury and lying.