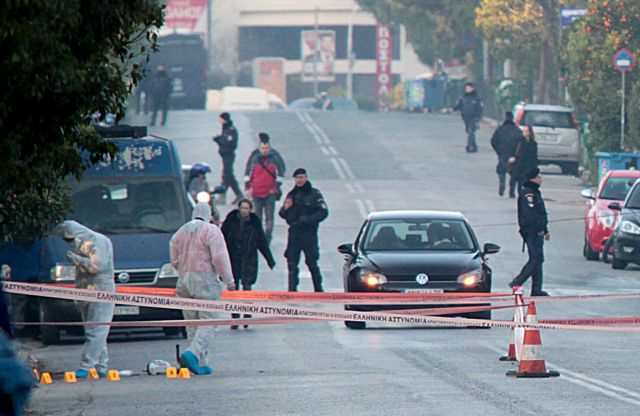 The police reported that gun shots were fired outside the German ambassador’s residence at 52, Ethnikis Antistaseos Street in Halandri, at about 3am on Monday morning. By 8.30am the police detained six suspects for questioning.

About sixty 7.62 bullet casings were found outside the residence, with a few rounds found lodged in the courtyard door. It has not yet been determined if any of the bullets got to the interior of the house. The police crime scene investigators are scanning the area in hopes of finding any evidence, such as DNA, which might help shed some light in the shooting.

There have been no injuries reported and the Minister of Public Order Nikos Dendias informed the Prime Minister Antonis Samaras, who later contacted the German diplomat. The police guard stationed at the ambassador’s residence, along with security camera footage from nearby buildings, is being examined by the counter-terrorism agency,.

The guard has so far reported that the four assailants fired against the building without taking aim against him. The guard explained that he did not respond to the shooters out of fear of causing injuries to people in the apartment buildings situated opposite of the ambassador’s residence.

Early estimations suggest that one of the weapons used in the shooting was a Kalashnikov assault rifle. It has not yet been determined how the assailants arrived on the scene, but it appears certain that they had a support team with motorcycles nearby to assist in their escape.

The defunct November 17 left-wing urban guerrilla organization attacked the German ambassador’s residence on the 16th of May 1999 with a RPG, which landed on the roof.

The Ministry of Foreign Affairs issued a statement in relation to the shooting, where it expressed its condemnation of the “cowardly terrorist attack” against the German ambassador’s home in Halandri, “which clearly aimed to harm Greece’s image abroad, a few days before it assumes presidency of the EU”. According to the press statement, the Deputy Minister Dimitris Kourkoulas visited the German ambassador Wolfgang Dold.

The German embassy later issued a statement thanking the Greek government and police for the immediate response, while stressing that the attack will not affect the friendship of the two countries and recovery efforts.

SYRIZA and other parties respond to shooting


SYRIZA commented on the attack noting that “such actions are in no way related to the peaceful, social and popular struggles of the Greek people against the unfair bailout policies, which have brought extreme poverty and misery in recent years” and added that “the Greek people respect the presence of all diplomats in our country”.

PASOK issued a statement noting that “the terrorists failed in their goal, as the authorities responded immediately” while praising the “European standards” of Greek institutions. The coalition government partner added that “the Greek people condemn terrorism and every form of violence”.

DIMAR also condemned the shooting outside the German ambassador’s house in Halandri, noting that “such actions harm our Democracy and insults Greece”.