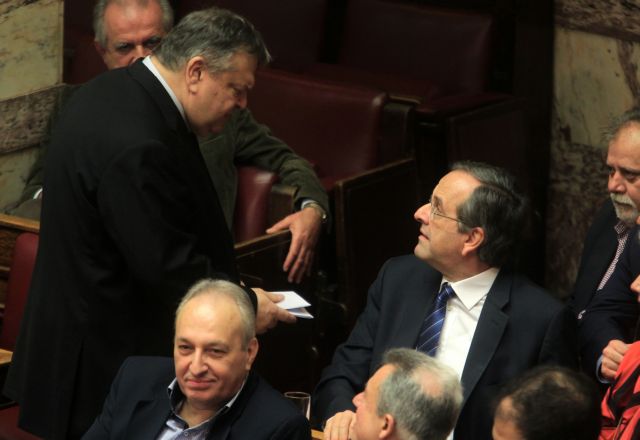 Even though the Prime Minister recently reiterated his intention to call elections in 2016, the recent expulsion of Byron Polydoras from New Democracy and the emergent discontent within PASOK, leave the coalition government faced with some hard choices to make over the holidays.

Prime Minister Antonis Samaras believes that his coalition government’s slight majority in parliament is enough to carry out his plans, while he also expects that the troika will ease its pressure on Greece during the six-month period when Greece assumes the EU presidency. Discussions with Fotis Kouvelis have been initiated to discuss the conditions under which DIMAR will return to the coalition, to ensure parliamentary majority.

The expulsion of veteran politician Byron Polydoras from New Democracy and the disappointing poll divs regarding PASOK have undoubtedly caused concern, while suggesting that the government may be faced with surprises in upcoming votes in Parliament. The coalition government is not worried so much about the polls which show that SYRIZA is ahead of New Democracy, since the same polls also show that Antonis Samaras is consistently considered a more appropriate PM than his rival Alexis Tsipras.

With the recession well-entrenched in the Greek economy and growing frustration over the unprecedented taxation, the coalition government has tried to placate public opinion with promises of “rectifying the injustices” by diverting 70% of the primary surplus towards social groups such as pensioners and the security forces.