SYRIZA’s proposal for a submarine deal inquiry has been rejected 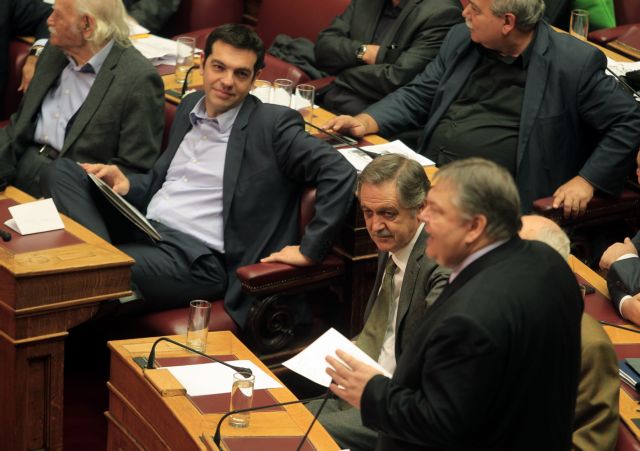 After a heated debate in Parliament regarding the opposition’s proposal to form an investigative committee to examine the controversial submarine deal, a vote was held and SYRIZA’s proposal was rejected. Of the 287 votes, 120 were in favor while 167 were against.

The opposition leader Alexis Tsipras launched a scathing criticism against government, claiming that its stance on the matter was suspect. Mr. Tsipras wondered “how will you sweep four rotting submarines under the rug? They do not fit. This matter is serious and you are obliged to answer”.

Mr. Tsipras targeted the PASOK leader and government Vice President Evangelos Venizelos and stressed that the scandal started with Akis Tsohatzopoulos and peaked when Venizelos and Giorgos Papakonstantinou became Ministers of National Defense and Finances respectively.

In his conclusion the SYRIZA leader referred to the scandal as “a German colpo grosso” which harmed the interests of the Ministry of National Defense and the State and questioned why the coalition government was that fearful of an inquiry.

The PASOK leader Evangelos Venizelos took the stand and accused Tsipras of “repeating obscenities and lies” to support his political presence and claimed that he was not surprised by the latest accusations, having addressed them before the 2012 elections.

Mr. Venizelos noted that “attack became SYRIZA’s assault strategy” and that “when you don’t have anything to say, you resort to lies”. The government Vice President also accused Mr. Tsipras of serving the interests of off shores and the “professionals of the offset benefits”.

Continuing his criticism of the opposition, Mr. Venizelos noted that the submarine construction must be completed as soon as possible and a deal must be struck with the Skaramangas and Elefsina shipyards.

KKE supports proposal, despite having objections

The Communist party decided to support SYRIZA’s proposal for an inquiry, although the head of KKE’s Parliamentary Group Aleka Papariga characterized the proposal as “exceptionally shallow politically”.

Mrs. Papariga claimed that the deals with the shipyards and submarines have consistently been problematic, but investigating committees have never been thorough enough to reveal political or criminal liabilities. She further explained that unlike “SYRIZA who wants to harm the government”, her party was not interested in destabilizing the government, but rather to “overthrow its anti-people politics”.