Tsipras and Venizelos preparing for major clash in Parliament 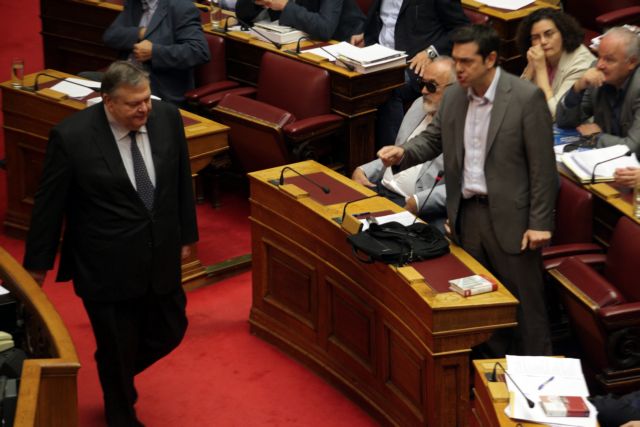 The president of SYRIZA Alexis Tsipras and the president of PASOK Evangelos Venizelos are preparing for an all-out war in Parliament today, as the discussion for the formation of a Committee to investigate the submarine scandal, is scheduled to begin at 10am and end at 5pm today.

The government Vice President will have the backing of the Minister of National Defense Dimitris Avramopoulos and experienced PASOK executives such as K. Skandalidis, P. Koukoulopoulos, F. Sahinidis, P. Rigas and K. Triantafyllos. It is not yet known if the Prime Minister will attend the discussion.

Many within New Democracy’s Parliamentary Group are frustrated by this case, since they dot wish to support the PASOK leader (and former bitter rival), as it will contradict the party’s recent scathing criticism of how the submarine scandal had been handled. MPs Michelakis, Meimarakis and Tasoulas were particularly vocal in their criticism.

The PASOK leader recently hinted that he intends to raise the tone of the discussion, as he believes that the inquiry is a “contract for a political assassination or injury”, which he attributes to “interests that have been harmed by my politics”. Mr. Venizelos claims that Mr. Tsipras is supporting these particular interests.

SYRIZA MPs on the other hand respond that should PASOK have any evidence to suggest that the opposition is adopting these “particular interests”, they should go public and address the relevant authorities. Further more, they claim that there are no personal differences between the two leaders and that the purpose of the inquiry is to unveil “the timeless political responsibilities” of those who handled the submarine case and are part of the “vicious two-party system”.

Meanwhile ANEL has announced that it intends to support SYRIZA’s proposal on the inquiry, while reporting that their party leader Panos Kammenos has been campaigning this issue since 1998. Similarly, the Communist party KKE has expressed its support of SYRIZA’s inquiry proposal, but noted that such a move is pointless.

On the contrary, former government partners DIMAR have reported that they will vote against the proposal on the grounds that it “incites an artificial polarization and leads to the criminalization of political debate, which is taken advantage by the enemies of parliamentarism”.