Samaras and Venizelos agree to adopt a harder stance against troika 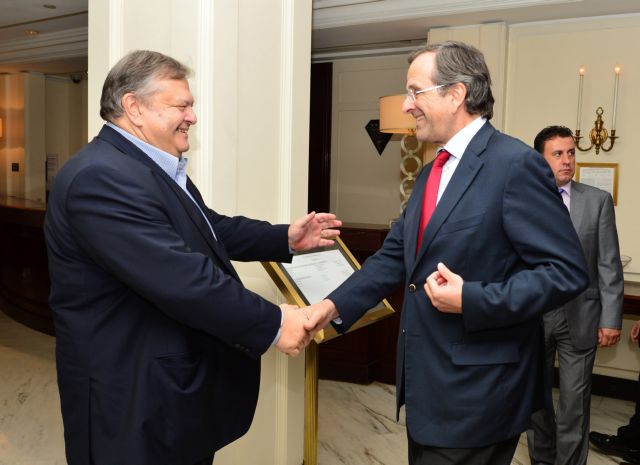 With the pressure from Greece’s lenders ever increasing, the Prime Minister Antonis Samaras met with the government’s Vice President Evangelos Venizelos and discussed how to best defend their “line in the sand”. At the end of the two-hour late evening meeting, the two leaders decided that Greece should adopt an equally cold stance towards the troika and to work on a unilateral plan for the primary residence auctions, in case there is no agreement with the troika.

The two leaders want to make it clear to the troika that Greek society has reached its limits and that political stability must be supported. Interestingly this became more prominent after the IMF suggested that the experiment with a reduced VAT rate in restaurants had failed.

Along with the submission of a budget without the troika’s approval (but the distinct possibility of an addendum later in the year), the potential of a unilateral decision on the primary residence auctions can be viewed as the Greek government’s first “aggressive” move since 2010.

During last night’s meeting, which also saw the participation of the Ministers of Finances Yannis Stournaras and National Defense Dimitris Avramopoulos, the two leaders stressed the importance of supporting lower and middle-class households, as they have bared the brunt of the crisis, but at the same time they cannot extend the protection to those who hide behind it to not fulfill their obligations.

As such, the plan being drafted is based on the protection of a primary residence of an objective value up to 180,000 euros, without any income criteria and excluding those with bank accounts and additional income. There were some thoughts of establishing a three-year protection, but with the economy predicted to improve each year, this will likely be revised.

Regarding the defense industries, for which Mr. Avramopoulos attended the meeting, the government is not prepared to back down and will support its claim to maintain the export side of EAS for 18 months and then reduce staff by 500 via voluntary departures. The troika has also been pressuring for a deregulation of mass dismissals, but the government is only willing to discuss giving the relevant Minister the authority to approve mass dismissals.

The situation at the Skaramangas Shipyard was also touched upon, with the Prime Minister reporting that talks with the Safa side are on track for the collection of the submarines and the shipyard operation. Mr. Samaras explained that EU bans must be further investigated on the operation of shipyards.

The Prime Minister and Vice President also discussed the Opposition’s application for an inquiry into the submarines debacle and concluded that SYRIZA is delaying procedures on purpose. Mr. Venizelos in particular, who was implicated in the scandal of defective submarines during his tenure as Minister of National Defense in the Papandreou administration, wants to address the charges as soon as possible.