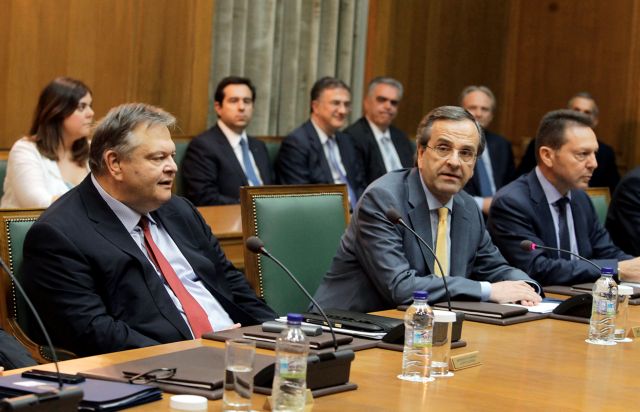 The Prime Minister Antonis Samaras and Vice President Evangelos Venizelos have arranged to meet today in order to plot their strategy for the upcoming round of talks with the troika, as the creditors’ pressure and demands increase. The Greek government is not willing to back down on the critical primary residence auctions and mass lay offs, as they concede that the Greek people have reached their limits.

The important meeting comes two days before the Prime Minister’s trip to Brussels, where he has been invited by European Commission president Barroso to participate in the College of Commissioners. There, in the heart of the European establishment, Mr. Samaras will have the opportunity to highlight the reforms and sacrifices made in Greece over the past 17 months in an effort to ease some of the pressure.

The two main problems the Greek government has to face are that of the lift on the temporary ban on primary residence auctions and mass layoffs. Athens maintains that it never committed to any changes to the auctions and is furthermore concerned about how non-negotiable issues have been brought up, such as the proposition to grant pensions based on income.

With pressure mounting both from Europe and the Opposition, the government’s fragile parliamentary majority of 154 MPs will be put to the test in a series of critical votes in Parliament. In order to prepare for the critical talks with the creditors, the PM was in constant touch with Mr. Venizelos and had repeating meetings with his Ministers of Finances Yannis Stournaras and Growth Kostis Hatzidakis.

The government wants to maintain the auction ban for taxpayers who are genuinely in a dire financial state, but will be lifted in cases where taxpayers refuse to pay, despite having the necessary funds. Regarding mass layoffs, the general consensus in the coalition government is that the relevant minister or an appointed committee can decide on mass layoffs, rather than carry out a complete deregulation as per troika demands.