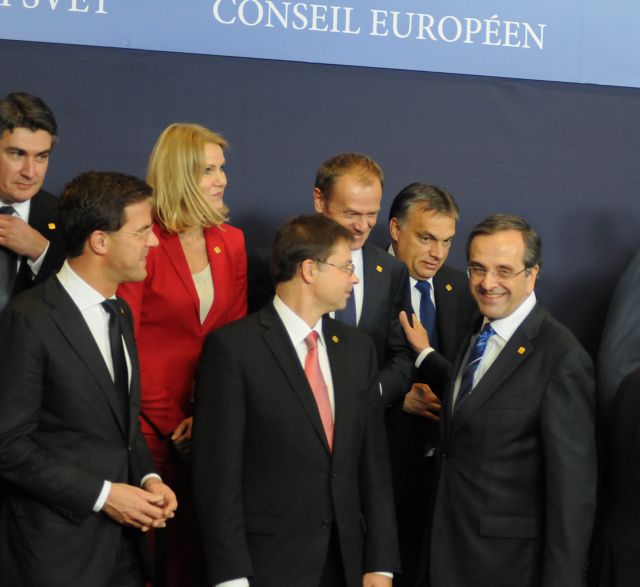 At the EU Summit in Brussels, Prime Minister Antonis Samaras focused on tackling the acute and long-term problem of illegal immigration which mostly affects the countries in the south of Europe.

Mr. Samaras had the opportunity to meet with German Chancellor Angela Merkel and Spanish PM Mariano Rajoy at sidelines of the European People’s Party session. During their 20-minute meeting with Mrs. Merkel Mr. Samaras explained that Greeks are unable to endure any further fiscal measures.

According to Mega Channel, which relied on the reports of the PM’s associates, the Greek debt problem must be dealt with before the upcoming European election.

The presence of the Minister of Finances Yannis Stournaras at the EPP’s summit for the first time surprised many, with senior government officers suggesting that Mr. Samaras might be intending to take advantage of Mr. Stournaras in a European capacity.

The EU summit continues today, with the emphasis being on illegal immigration and finding solutions to the recent tragedies at sea, such as in Lampedusa. An increasing number of countries have requested that preventatives measures be taken against such tragedies.

Greece, Cyprus, Malta, Italy, Portugal, Spain, Hungary, Slovenia and Croatia have all demanded increased support for the EU border control service Frontex and the formation of a special task force under the European Committee to tackle illegal immigration. According to diplomatic sources, France might also be joining and supporting this group.