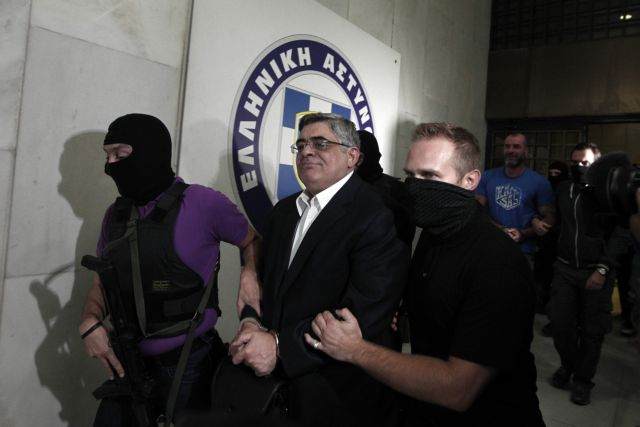 On Saturday morning the Police arrested Golden Dawn’s general secretary Nikos Michaloliakos, along with MPs Ilias Kasidiaris, Ilias Panayiotaros, Yannis Lagos and Nikos Michos and a number of prominent party members and supporters including the head of the party’s Nikea offices Giorgos Patelis and two police officers who appear to have been involved in Golden Dawn’s illegal activities. In total the police had warrants for 32 people, including the party’s deputy leader, Christos Pappas, who gave himself up to the Police on Sunday.

The arrests were ordered by the Supreme Court, which established that Golden Dawn operated like a criminal gang. Nikos Michaloliakos is considered the leader of the gang and Nikos Pappas the deputy leader, with both of them facing a minimum of ten years imprisonment. Participation in a criminal gang, which is considered a felony, can result in an arrest without having to formally lift parliamentary immunity.

According to the 9-page report that deputy prosecutor Vourliotis composed, Golden Dawn had a distinct paramilitary “Führerprinzip” structure, with Mr. Michaloliakos identified as the party’s sole “Führer” and Mr. Papas as his deputy. The prosecutor’s investigation indicates that Golden Dawn members were directly involved in a number of murders, setting up extortion rings and money laundering operations along the way to support their activities.

From the investigation at Mr. Michaloliakos’ home in Pefki, the police recovered three unregistered firearms (a handgun, revolver and hunting rifle), about 40,000 euros in cash, USB flash drives and computers and a huge portrait of Adolf Hitler that was prominently displayed. One of the arrested police officers, a female police sergeant in Piraeus, maintained a mini arsenal at home, with the Police recovering a service revolver, a flare gun, a replica gun, a trench knife, a tazer gun, two swords, knuckledusters, knives, firecrackers, 20 rounds of ammunition from an assault rifle and a Golden Dawn supporter’s card.

As soon as the arrests became known, about 300 to 400 Golden Dawn supporters gathered outside the Central Police HQ on Alexandras Avenue, including Mr. Michaloliakos’ wife MP Eleni Zaroulia and daughter Ourania Michaloliakou. While being transferred to the Evelpidon Courts to have charges addressed to them, the arrested MPs defiantly claimed to be persecuted for the political ideas.

Mr. Pappas had escaped arrest for about 24 hours and is thought to have made arrangements for succession in the party and to destroy incriminating evidence. He appeared at the Central Police HQ shortly before 2pm on Sunday and gave himself up, claiming to have “nothing to hide”. During investigations at his home in Giannena the police found a .38 pistol, pictures of Adolf Hitler, swastikas and German helmets.