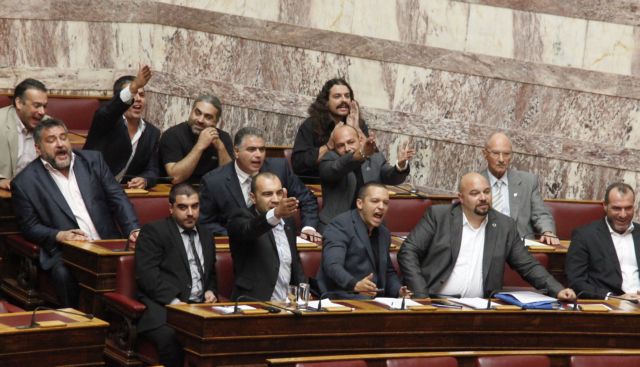 According to article 62 of the Constitution, the Parliament’s authorization is not necessary in the case of continuing offenses, such as the ones which prompted the police to carry out the arrests of Golden Dawn leader Michaloliakos and his MPs.

Despite the arrest though, Mr. Michaloliakos and his cohorts maintain their MP status and only risk losing it in the event of a final conviction, in which case they lose all relevant rights automatically. A conviction could also result in their political rights being withdrawn, which would not allow them to participate in future elections.

Article 55 of the Constitution states that to be eligble for election as a Member of Parliament, a candidate must be a Greek citizen, legally competent and over the age of 25 on the day of elections. Not fulfilling any of these criteria results in an automatic loss of Ministerial status.

The recent developments with Golden Dawn could potentially trigger early elections, since Parliament regulations state that an MP can resign at any point and will be replaced by runner-ups. There is a fear that Golden Dawn MPs would resign at regular intervals in order to trigger elections and destabilize the political situation in Greece.

In this case though, Constitutional experts assert that Parliament could vote an amendment in order to tackle the abuse of MP resignations.