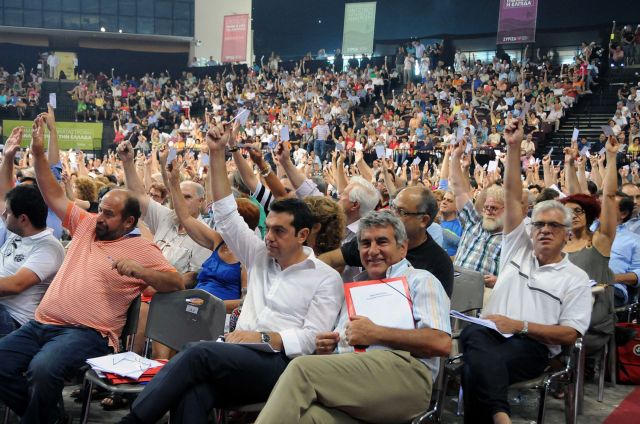 SYRIZA’s founding conference ended on Sunday with the election of Alexis Tsipras as president. Mr. Tsipras was up against SYRIZA’s feminist policy supervisor Sissy Vovou and conference councilor Panos Iliopoulos.

The convention was characterized by tension, as it was decided to transform SYRIZA from a collection of independent smaller parties into a unified party. It was decided that the president would be voted by conference participants directly, rather than through a central political committee.

The conference participants also voted on SYRIZA’s policies of erasing part of the national debt and negotiating the rest, rejecting the minority proposal of disputing the entirety of the debt.

The intraparty strife became apparent early on in the Conference, with Manolis Glezos criticizing Alexis Tsipras for attempting to homogenize SYRIZA’s political pluralism. Panagiotis Lafazanis’ Left Platform proposals of maintaining the option to leave the Eurozone, impose public control on banks and nationalizing strategic sectors of the economy were all rejected.

In order to avoid an all-out conflict, Mr. Tsipras and the various factions came to a compromise, whereupon the individual factions would have two to three months to integrate into SYRIZA.