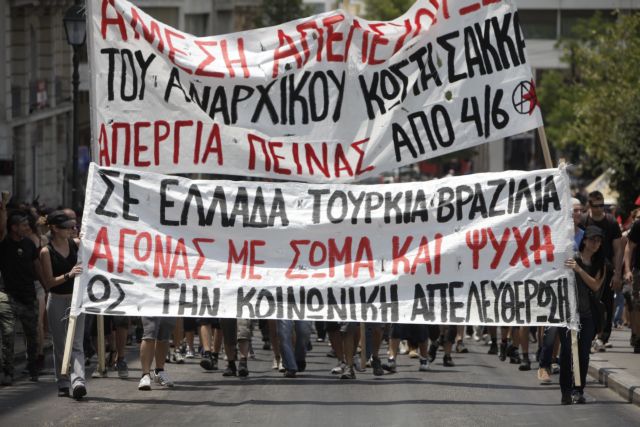 A number of demonstrations of solidarity are taking place today for anarchist Kostas Sakkas, who is on a hunger strike. A demonstration outside the Appeal Courts is currently taking place, while another has been organized by human rights movement KEDDE outside the Ministry of Justice at 19:30. The Appeal Council will decide on Sakkas’ case by Thursday.

Sakkas, who denies the accusation of participating in militant group “Conspiracy of Fire Cells” (SPF), has been detained for 31 months without trial, having exceeded the constitutionally and legally provided maximum detainment period. Despite this, the Appeal Council recently decided to extend his detainment by a further 6 months.

In response, Sakkas went on hunger strike on the 4th June (when he completed 30 months of detention), demanding his immediate release. As a result of the hunger strike, Sakkas’ health has deteriorated significantly, with medical staff expressing fears of permanent damage to his health. A ruling by the Appeal Council on this application is pending.

On Sunday SYRIZA held a demonstration outside the General State Hospital of Nikea, where Sakkas is being treated. A concert also took place in the courtyard of ERT, where it was announced that he Monday evening news program of ERT will feature an extensive report on Sakkas’ case. On Friday a huge motorized demonstration ended outside the hospital where Sakkas is being treated.