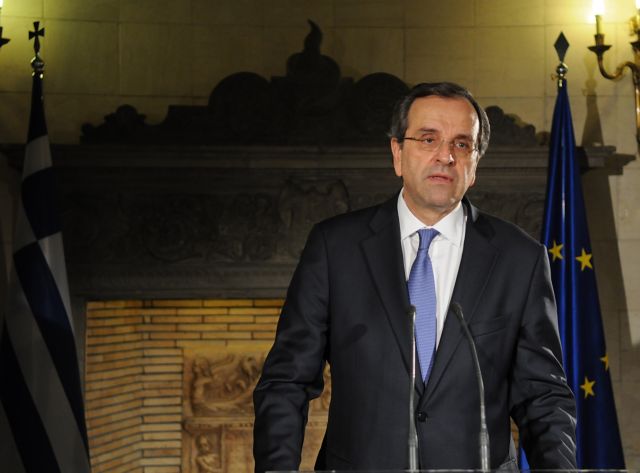 After last night’s failed meeting with government partners PASOK and DIMAR, the Prime Minister called an emergency meeting with his cabinet (with the exception of the four DIMAR ministers) and New Democracy MPs.

Mr. Samaras later made an announcement, claiming to seek a compromise and blaming Mr. Kouvelis of backtracking on the ERT issue. The Prime Minister commented that “our goal is to save the country in our four years. Mr. Venizelos was right about one thing, nobody wants elections or the absence of governing”.

The New Democracy ministers and officers rejected the idea of early elections and maintained that the country needs stability, in order for the government to complete its four-year administration. The Minister of Foreign Affairs Dimitris Avramopoulos asserted that “we continue down the path of responsibility and the great changes that the country needs«.

The Minister of National Defense Panos Panagiotopoulos admitted that early elections are in nobody’s interest and expressed his estimation that “the country will be out of this mess next year […] and our children will smile again”. Mr. Panagiotopoulos added that “the path of reforms, of democratic reforms is the only path for the recovery and rescue of Greek society from the economic crisis”.