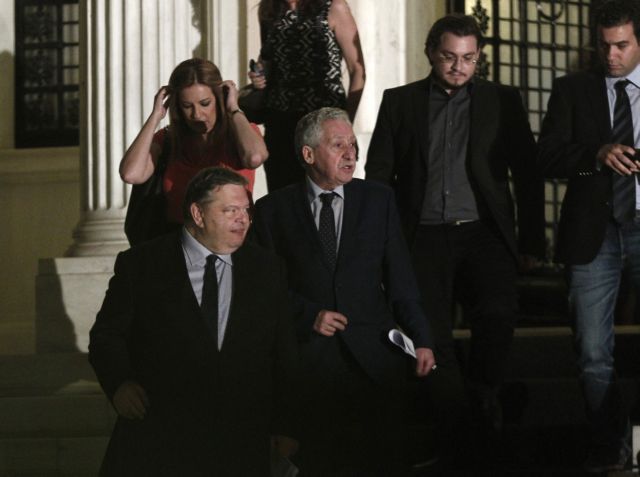 The inability to come to a mutually-agreed decision on ERT at last evening’s meeting at Maximou Hall appears to be the tip of the iceberg that threatens to sink the government coalition. According to Mega Channel, DIMAR is prepared to withdraw its four Ministers, while blaming the PM specifically.

PASOK on the other hand is prepared to compromise on ERT and remain in government, on condition that there coalition agreement, operation and composition are updated. Mr. Samaras is prepared to ask for a vote of confidence in Parliament.

Last night’s meeting lasted about an hour and it became clear early on that it would be difficult to come to an agreement on ERT. The Prime Minister’s proposal did not satisfy Mr. Kouvelis, who insisted on the entire ERT staff operating the transition public media outlet. Mr. Venizelos appeared more conciliatory and spoke of “discussing the great matter: reestablishing government cooperation”.

DIMAR blames PM for schism
The PASOK and DIMAR leaders left Maximou Hall for their political offices while the PM called a ministerial meeting. Mr. Kouvelis commented that “there was no common political ground regarding ERT” and that “for us it is a matter of democratic legitimacy”. The DIMAR leader further explained that the decision to shut down ERT was against his party’s expressed wishes, indicating “a choice to refuse government cooperation”. A new meeting of DIMAR’s Parliamentary Group will take place around 11am on Friday.

Mr. Venizelos clarified that he is not in favor of early elections, hinting that PASOK would continue supporting the coalition government, under a new deal. Mr. Venizelos even invited DIMAR to participate. The PASOK leader however remarked that it is none of their business is a partner wants to leave the government coalition.

SYRIZA reaction to breakdown
Opposition leaders SYRIZA commented on these developments that “the tripartite bailout government is collapsing under the pressure of popular protests and the failure of its politics” and that “SYRIZA will rise up to the demands, in response to the intentions of the great social majority, by contributing effectively the grand change that will pave the way to hope”.