Government partners balancing on a tightrope 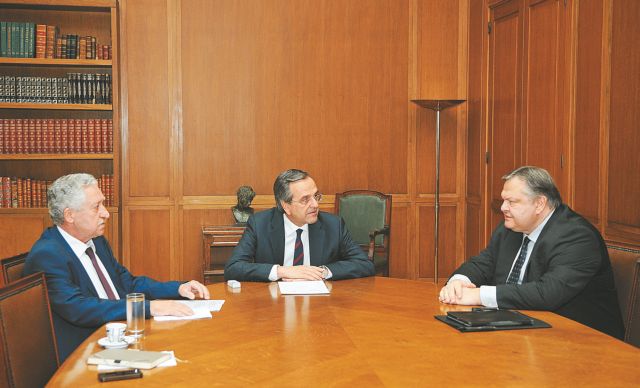 After a few intense days, the government partners have found a balance so that there is a calm atmosphere at tonight’s crucial meeting. A great effort was made to bring everyone to a compromise and avoid the nightmare scenario of doubt and elections.

The thee leaders, Prime Minister Antonis Samaras and presidents of PASOK and DIMAR Evangelos Venizelos and Fotis Kouvelis, will meet this evening in order to find solution to the public television problem, but also to discuss a number of other issues, such as changes to the government council, updating the government’s goals and taking steps for better government coordination.

Regarding public television, the three appear to have come to an agreement that ERT is over and a new institution will take its place. It is no coincidence that Venizelos and Kouvelis referred to “public television” rather than “ERT”.

The argument seems to be how many to recruit in the new public television institution. Samaras and Stournaras have abandoned their extreme proposal of a transitional body with about 30 to 90 employees and now speak of about 800, while PASOK and DIMAR argue that about 1,600 employees will be necessary.

DIMAR officers however suggest that the three leaders did not discuss the number of employees to be recruited in the new institution, nor a cabinet reshuffle. Sources from DIMAR and PASOK reveal that a number of other internal government issues have reopened. A renegotiation of the troika program was also brought up, in light of the recent IMF/EC clash.

Despite the tension, the climate changed and the three leaders had a calm discussion. They discussed the government’s operation, with Venizelos and Kouvelis insisting that there can be no more surprises and that they must improve communication and coordination.

The three leaders agreed to set up a committee to coordinate developments on important matters and current affairs, such as ERT. It was also decided that the cabinet reshuffle will take place after New Democracy’s convention, which is scheduled to take place between the 28th and 30th of June.