Tsipras declares government’s cycle “is over” 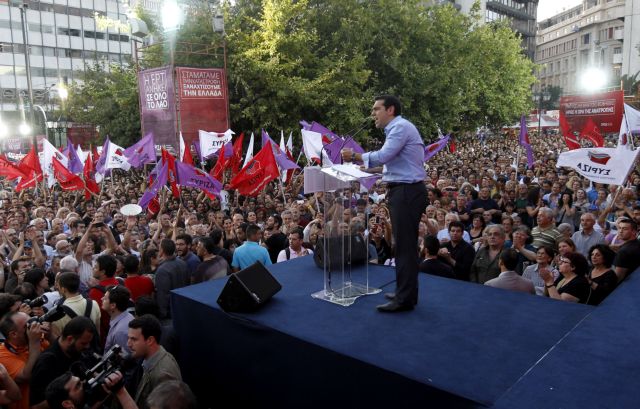 Opposition leader Alexis Tsipras spoke in Syntagma Square last night, where he attacked the Prime Minister and accused him of authoritarian and undemocratic practices. Police estimations suggested that about 5,000 to 6,000 attended the speech, with the crowd congregating around the lower part of the square.

Mr. Tsipras took the stand at around 9pm, announcing that the Prime Minister Antonis Samaras “is finished” and that he must “leave, but leave the silverware, because it does not belong to you, it belongs to the Greek people”. Mr. Tsipras dubbed the Mr. Samaras’ administration as “a government of catastrophe” and explained that Samaras’ only ally left is Golden Dawn. The SYRIZA leader referred to ERT’s closure which he likened to a “coup” and “beheading of thousands of employees and the Greek citizen’s right to information”.

Speaking of the past elections, Mr. Tsipras explained that “a great opportunity was missed […] not for SYRIZA, but the people. A year ago they lied and terrified the people. They said they would renegotiate the bailout, when they had already agreed to implement harsher policies. They said if SYRIZA came to power jobs would be lost. Their plan involved thousands of dismissals and extreme unemployment. They said if SYRIZA came to power that bank accounts would be lost. They were read to accept everything, even a bank account haircut, just like in Cyprus. They said if SYRIZA came, the economy would collapse. When they new that by signing to extend the bailout, the economy would collapse”.

Mr. Tsipras repeated his party’s commitment to securing pensions, wages and providing social welfare before “paying off interests and loan sharks”. He also promised to erase debts for people under the poverty line and a number of other measures to relieve taxation.

The opposition leader spoke of his party’s activists “from Manolis Glezos to the youth of today, to remind us the simplest thing: that the only struggle lost, is the one you have not fought for”.

A full transcript of the speech is available here.