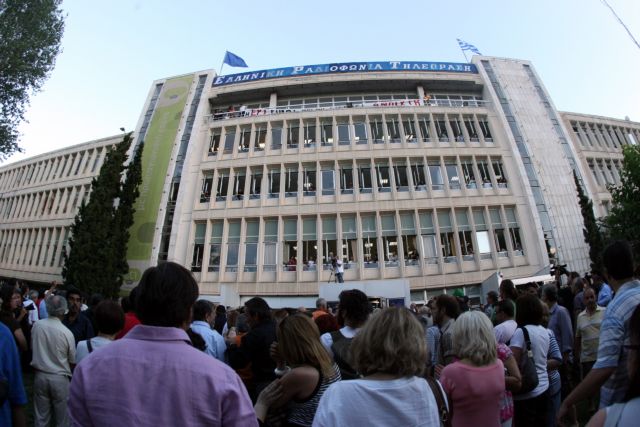 The government confirmed rumors regarding the future of troubled public broadcaster ERT by announcing via press representative Simos Kedikoglou its decision to shut ERT’s service down by midnight, with the intention of creating a more streamlined service in three months. The sudden decision has caused fierce reactions, both from employees and other political parties.

Earlier in the day, a legislative act was passed allowing Ministers to merge or shut down public institutions, allowing the government to circumvent Parliament on crucial matters. Mr. Kedikoglou justified the government decision by claiming that ERT was a “hotbed of corruption” and operated in a scandalous way, while promising that the new broadcasting service will be public. He also stated that ERT employees will be compensated and can apply for a job in the new broadcasting service.

As expected, this caused intense reactions from employees who announced that they would carry on operating, despite the government mandate. SYRIZA’s leader Alexis Tsipras and historic MP Manolis Glezos visited ERT’s courtyard, where the congregating employees were protesting the government’s decision. Mr. Tsipras stated that “this is a coup not only against the employees but the entire Greek people. They lie to the Greek people whey they say care about the waste, they lie because ERT doesn’t take from the budget”. Mr. Glezos commented that “ERT expresses the will of the people to document everything happening in Greece and the world”.

At around 23:00 ERT reported that the police units were approaching its broadcasting center on Imittos and Hortiatis, with the television station’s digital signal going offline at 23:15. ERT’s television coverage of the developments went back online shortly afterwards, after KKE offered to relay the signal via its own television station 902.

The controversial decision was not backed by government partners PASOK and DIMAR, who issued announcements criticizing the Prime Minister for the sudden decision. PASOK requested an immediate government leader meeting and clarified that it “completely disagrees with the decisions and the government’s handling. That is why the legislative act is not signed by PASOK ministers. PASOK has made it clear that it will not ratify the legislative act in Parliament”.

DIMAR also issue a press release explaining that “it is inconceivable for a modern and European country to not have a public television station – even for an hour” and suggested bringing ERT back on the air, while the reorganization for a new service begins.

SYRIZA’s Panagiotis Skourletis stated that “ERT does not belong to the government, but the Greek people who pay for it and demand that it be a model of uncompromising and pluralistic information. We will stand against the government’s plan for the complete depreciation and destruction of ERT and fight for ERT’s improvement with its employees”.

Former Independent Greeks (ANEL) press representative Terrence Quick commented that “what PASOK was unable to achieve with Ilias Mosialos, the tripartite government managed: the destruction of Public Radio and Television under the pretext of streamlining”.

The Communist Party (KKE) commented that “the government is initiating the abolition and merging of public bodies and institution with terrible consequences for the people. KKE expresses its solidarity to all the employees in all the public institutions and ERT employees and calls them to rise up and coordinate their struggle”.

The journalist union ESIEA condemned the government’s decision and has called for a mobilization against the “unprecedented for a democratic country closure of Public Radio and Television” and asked Government Representative Kedikoglou to hand in his Press ID and resign from its ranks.