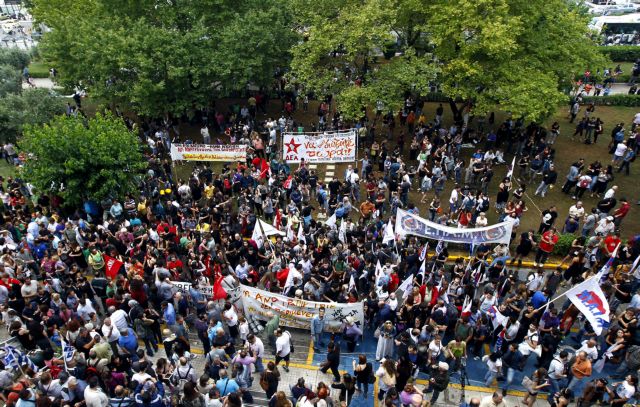 The countries largest employee unions GSEE and ADEDY have announced a 24-hour strike for Thursday the 13th of June, in response to the government’s decision to close public broadcasting network ERT. The two labor unions announced their decision after their noon meeting.

ADEDY’s General Secretary Ilias Iliopoulos explained that “we want to show our solidarity to the state TV workers and protest against these unacceptable public sector reforms that the lenders have demanded”.

In their announcement, ADEDY’s executive committee condemned “the government’s coup” which “puts an end to objective information and pluralism of news coverage”.

ADEDY also called all public sector employees to participate in the mass demonstration outside the ERT facilities today at 6pm.

The employees in the buses and trolleys in Athens have announced that they will participate in the 24-hour strike. In Thessaloniki the union of urban transport employees will work between 9am and 9pm.

The Panhellenic Federation of Railway Workers (POS) announced that it will also participate in the strike, meaning OSE trains and suburban rail will not operate. This also means that Line 3 of the Metro will not terminate at the airport, but Doukissis Plakentias station.

The Air Traffic Controller union announced a walkout between 3pm and 5pm, so there will be no flights during that time. Civil aviation employees in the regional airports will walk out between noon and 5pm. Travelers should contact their airline to confirm any changes to their flight schedule, before heading out to the airports.

A number of unions from other sectors have also announced their participation in today’s strike, such as hospital OTE, private school and ministerial employees.