May Day protests in Athens end 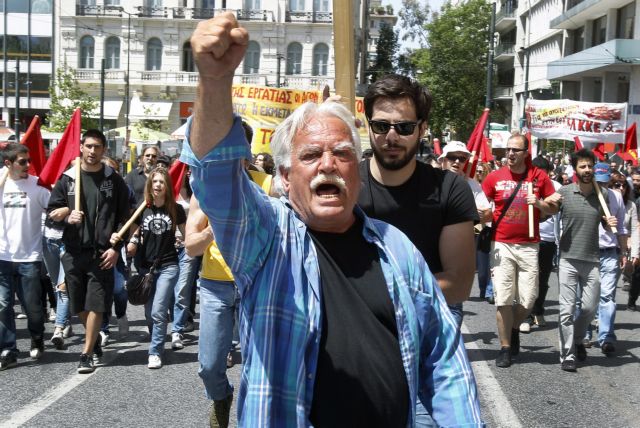 The May Day protests of GSEE, ADEDY, PAME and groups of anarchists and the far-left ended shortly after noon. According to police estimations, between 7,000 and 8,000 people participated in the three demonstrations.

The country’s largest worker unions GSEE and ADEDY in their 24-hour strike for the 1st of May. It is reminded that the Ministry of Labor decided to move the May Day celebrations to May the 7th, because it coincides with Good Wednesday.

The unions demand that unemployment by dealt with, that Collective Labor Agreements be signed and to restore the employment conditions. They also demand an end to austerity and imposition of new taxes as well as measures to deal with undeclared and uninsured employment.

The GSEE, ADEDY and Athens Worker Center strike will begin at 11am at Klafthmonos Square. PAME has decided on a separate protest, which begins at 10.30am at Syntagma Square. At present, the PAME demonstration has begun at Syntagma Square, while GSEE and ADEDY hold their protest at Klafthmonos Square. Groups of anarchists and the far-left are holding their own protest outside the Archeological Museum.

Protesters will later march to Parliament, except the PAME protesters, who will head towards the American Embassy. Due to the protests, the police has ordered the closure of the Metro stations of Panepistimio, Syntagma, Evangelismos and Megaro Mousikis.

PNO, the maritime worker union, has announced a 24-hour strike for May 1st, with shipping companies adding extra routes to make up for inconveniences. The TRAINOSE unions will participate in the GSEE/ADEDY strike, so no TRAINOSE or Suburban Rail trains will operate. The Metro, Electric Railway, buses and trolleys will operate as normal between 9am and 9pm. Further information is available via telephone at 14511and online.